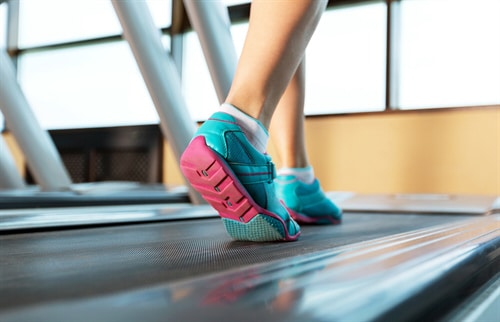 If only it were as simple as some people say: Just walk for better health.

But that is such a minimalist approach that may not yield even minimal benefits.

We tend to believe that walking is enough to protect the heart, reduce the waistline, maintain or even build better bones, and reduce our risk for falling as we age. There is good evidence for each of these benefits, but with a caveat: strolling is not walking, and slow walking is not that beneficial all around.

But we need to ask, too, what is strolling or slow walking? If you’re a college student walking 3 miles per hour, you’re going too slow to see any fitness benefits…unless you’re walking in hilly terrain for hours on end, of course. If you’re a Medicare recipient, however, that same speed even over ground or on a treadmill may be sufficient to derive some benefits, if that speed is at about 60% or more of  your maximum ability.

Studies have shown that frailty in the aged population is definable as the inability to walk faster than 0.8 meters/second, or 2.6 feet/second or 1.8 mph.

You can test this at home by using your cell phone’s stopwatch to walk 15 feet. If you can’t do it in 6 seconds, you may want to see your doctor…and engage the services of a physical therapist or personal trainer.

But when it comes to building bone density, the evidence is less concrete.

Two articles in the April 1 and April 22, 2016, New York Times addressed this concern and may have led some to believe they’ve been wasting their time.

A Second Look at a ‘Misconception’ on Exercise and Bones

Exercise for Preventing and Treating Osteoporosis in Postmenopausal Women.

After reading these, I went to first the source for the author’s conclusion that exercise is not the path to strong bones, and then to www.pubmed.com to investigate her further explanation in the later article.

First, let me just say that, yes, gentle walking and light resistance training are not optimal bone building modalities; in that, she was right. But she did not tell the whole story: both those modalities help to maintain bone quality and reduce fall risk as you age if done consistently, that is, at least twice a week.

Second, whereas she does note the difference between bone density and bone quality, this needs further explanation.

Bone density takes into account the overall diameter of bone and its mass via a dual electron X-ray (DEXA) measurement. This really only looks at the cortical bone, the outer layer of solid bone that is resistant to compression. Think of this as the posts or pylons of a bridge that allows it to have the structural strength to withstand cars and trucks rolling over it.

Bone quality is a more complex assessment that also looks at the architecture on the inside of the bone that appears as a matrix rather than a solid hunk of matter. Think of it as the struts that hold up the bridge, allowing it to bend and sway but not break.

Both elements are important so far as bone strength are concerned. Granted, this may be more information than she could include in an article but I think it’s important for readers of fitness and health related topics to understand before abandoning their workout programs.

She also points out that gentle exercise may help reduce one’s risk of falling but not necessarily one’s risk for breaking a bone. Maybe so, but I would contend that a fall-reduction program of gentle but proven exercises that go beyond simple standing balance drills have been shown to both reduce falls and reduce breaks from falls.

Finally, the author quotes from the summary line of the article from which she based her report: But an analysis that combined data from 43 randomized controlled clinical trials with a total of 4,320 participants investigating exercise and fracture risk concluded that while exercise had a “relatively small statistically significant” effect on bone density, “there was no effect on numbers of fractures.”

What needs to be made clear is that the entire sentence from the abstract of that article says, “Our results suggest a relatively small statistically significant, but possibly important, effect of exercise on bone density compared with control groups. Exercise has the potential to be a safe and effective way to avert bone loss in postmenopausal women.”

And it is that last bolded section that I want to highlight. For what we do not yet know is how large an effect a small change in bone density may really have. It is suspected that minor changes in bone density, if improved upon from a high risk level, actually confers substantial benefits so far as spontaneous fractures or even fractures from a fall are concerned. Many studies have been done that have found low intensity exercise, while not as effective as higher intensity exercises like jumping and heavy lifting, are still quite beneficial, even if only to maintain bone density as you age.

So the bottom line, I believe, is that we should strive for as high an intensity as our bodies, and minds, can handle in order to get stronger bones and reduce our risk from falling. But that if that intensity is difficult to achieve, due to arthritis, balance deficits, disease, or whatever, then do continue walking, even supported or assisted, and do get out of your chair and sit back down a few times in a row a few times a day.

For the one thing we do know for sure is that sitting around doing nothing yields more than nothing; it yields disease, weaker muscles, more fragile bones, greater risk of falling and higher risk for fall-related fractures.