The lunge is a regular lower body exercise in almost every group exercise class and many lower body pre- and re-hab program. It is considered one of the more functional exercises in that, unlike the basic squat, it positions the body in a gait-like manner, with one leg in front of the other. The lunge has been reviewed in various contexts here, here, and  here .

The traditional lunge (TL) is performed with the trunk held in a vertical position, centered between the two feet which are distanced much longer than a traditional stride or step. However, here at STEPS Fitness we promote a flexed-hip, forward-flexed lunge (FHL.) This is done in a shorter stance with most of the weight of the upper body is over the forward leg. The hips flex like a squat so the butt is pushed back, the front leg is nearly vertical to the floor and the spine is tilted in neutral position up to a 45-degree angle. This posture and position more closely approximates that of a runner or jumper prior to lift off. 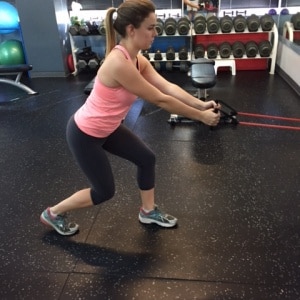 A study by Farrokhi et al. investigated the kinematics, kinetics and muscle activity of the lead leg of the FHL in comparison to the TL. They had 10 subjects do the FHL, TL plus a third lunge with the trunk extended (LTE).

Thus, the flexed-hip lunge performs as expected and as experienced by making greater demands on the glutes and hamstrings, the two muscle groups that drive lower body power and prevent ACL injuries.

Resistance training (RT) can be done in a variety of ways using a variety of resistances, from weights, tubes, body weight, etc. It has long been thought that the order of exercises in a training session might affect how the body responds in terms of strength gains, muscle growth, and anabolic (bone and muscle building) hormones. Prior research on younger subjects, athletic or otherwise, found that multi-joint (MJ) exercises like bench press, squat, and rows vs single-joint (SJ) exercises like curls, knee extensions, or triceps presses, yielded more favorable results.

Comparisons between MJ first, then SJ vs SJ-MJ found that the former was better. Other studies did not. But no studies have been done testing the different benefits in older women.

A study of 15 controls (no exercise), 14 MJ-SJ, and 15 SJ-MJ exercisers training 3/wk for 12 weeks. Both training groups showed significant and similar increases in muscle strength” (though the MJ-SJ improved slightly more) as would be expected. Both RT groups gained a little muscle mass mostly in the legs, again what one might expect as women generally don’t have the levels of testosterone that males have, even after menopause. Neither exercise order effected significant changes in testosterone or insulin growth factor-1, both of which are associated with strength and hypertrophy in males and younger females. 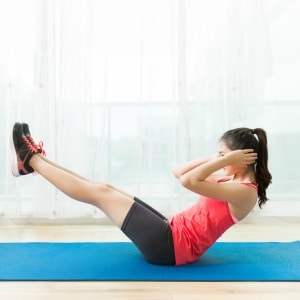 The authors suggested that “it is not obligatory to increase baseline levels” of anabolic hormones for older women to improve strength with a RT program, regardless of which muscle building exercises they do first.

Generally, if a rule can be derived from these results, it would be wise to do the most important and relevant exercises early in the session, which are usually MJ.

Want to reduce your risk of type 2 diabetes, high cholesterol and high blood pressure with one simple – well, not so simple – move? According to a report at the European and International Conference on Obesity (Sept. 2020) of a study that followed people with obesity (avg. age 54) for at least 4 years, all of whom lost 10% to 25% of their body weight, the risk of all of those diseases could be reversed. They found this multiple- disease risk- reduction occurred among those who consistently lost 13% of their body weight over that 4 year period.  Cleveland Clinic Heart Advisor Dec. 2020