Preventing falls among older adults is a health-care crisis of economic, quality of life (QoL) and morbidity dimensions. With nearly 60% of those over 65 reporting limited mobility and the high rates of falling in this group, exercise researchers are attempting to discern what type of programming is optimal.

A European group compared high-intensity Exergaming (ExG), which engages players to respond to stimuli quickly, in an explosive manner while maintaining balance and spatial orientation with multi-sensory stimuli, vs 60 minutes of cycling (Cyc)at moderate intensity after a warm-up of low-intensity walking drills. Each group did 25 1-hr supervised sessions, 5 d/wk for 5 weeks after thorough assessments of mobility.

Exercise intensity was kept similar in terms of heart rates and perceived exertion. Improvements in the general health-related QoL survey SF-36 and the WOMAC (an index of mobility impairment) were statistically similar, though the ExG did perform better overall.

Body mass reductions were also similar, as were depression-scale and 6-meter walk test scores. However, balance and Schwab-England Activities of Daily Living scores were significantly higher post-intervention among the ExG subjects than the Cyc and controls.

In conclusion, the authors acknowledged that general exercise, such as cycling, improves some elements of life for those with mobility impairments. But multi-dimensional training that demands rapid, multi-directional responses to a variety of stimuli may be preferred for overall balance and mobility improvements.

Running injuries are so prevalent that many shoe designs, running techniques, training modalities and protocols have been studied and modified to reduce them. Lately, gait retraining has taken hold in the therapeutic community with the idea that reducing tibial shock (TS), through which ground contact forces traverse to the knees, hips and low back, could alter the trajectory of an individual’s risk of injury.

So a study was done to see if providing biofeedback to a runner running on a treadmill at his or her preferred pace (vs one the researchers imposed) using neurophysiological principles would impact peak TS in the untrained limb. So what are those principles? 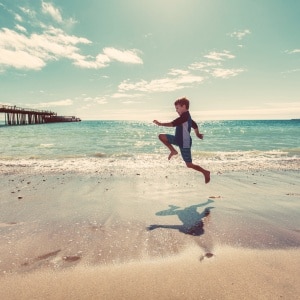 Few runners are perfectly symmetrical with TS varying as much as 30% or more. Knowing that the “left hemisphere of the brain may be more responsive to dynamic control of movement” and the right side “may be more sensitive with spatial, visual-motor, or kinematic feedback”, 13  recreational runners were trained 8 times over a 2 week period targeting only the right leg with biofeedback. The hypothesis was that this would translate to left leg reductions in TS as well at both preferred and at a 10% reduced speed.

Though slightly less reduction in left-side TS occurred at both speeds, this type of gait retraining, with focus on the right side, worked well.

The point is, think of hitting the ground softly with the right leg to help both.

The Bristol Robotics Lab at the University of the West of England developed what may be the worst robot ever: Pepper, the robotic personal trainer. Yes, it used artificial intelligence (which most trainers have) to coach runners on a treadmill program, “tell jokes, show sympathy, and even change…eye color to express different emotions.” Some runners actually were energized by Pepper and started to treat it like a ‘companion.’ Uh oh.                    CBI Feb. 2020