A more recent diagnostic of hip deformity, along with a more recent surgical procedure to manage it (thanks to the work of a Nashville orthopedist), has helped explain a lot of athletes’, and even non-athletes’, groin pain. Called femoroacetabular impingement (FAI), it is essentially a recognition that some groin pains are due to bony deformations. And arthroscopic surgery for the hip evolved largely from the ubiquity of this disorder and the fact that younger, injured patients didn’t need a total hip replacement…yet.

An Australian group investigated whether or not those with and without FAI altered their biomechanics in such a way as to set them up for problems later. Two groups of 15 subjects were tested doing an unconstrained deep squat, where they could compensate for weakness or pain, and a constrained deep squat, where they were told to not compensate from the trunk or pelvis. 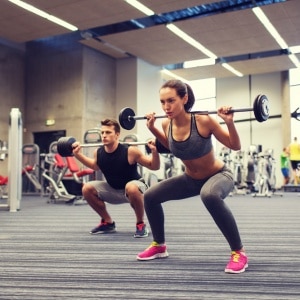 They found that FAI patients could squat as deep as healthy controls but compensated by shifting their weight to the unaffected leg and/or flexing less at the hips and trunk.

The authors acknowledge that, for athletes especially, these kinds of compensations may enable further function. However, the “long-term unfavorable consequences” could impact the hip’s structural integrity. It could also impact the spine as deeper flexion is accompanied by more spinal flexion, putting it at risk.

The issue with FAI in the younger population is, will surgery reduce or delay the need for a replacement. This is still a big unknown. More research and proper therapies are needed before answers can be offered.

Does Stretching Prior to Athletic Activity Impact Performance?

A recent article attempted to clear up a major controversy in the sports world: does stretching during a warm up affect subsequent athletic performance? A multinational group studied 20 male team-sport athletes performing each of 3 types of warm up on separate days: dynamic, 5-second static and 30-second static stretches, plus no stretching, before performing various athletic tests such as sprint, jumping, and agility. They also measured flexibility and “post-warm-up participant outcome expectations”, to see if they felt the warm up helped, hurt or had no effect on performance.

In essence, the results demonstrated that the pre-participation warm ups “did not detectably influence flexibility or maximal vertical jump, sprint running acceleration, or charge of direction [agility] test performances compared” to no stretching. In fact, test reliability was deemed good to excellent for the sprints and jumps, and moderate for the agility, “despite the stretching component of the warm-up” differences.