Running is mostly good for you. Studies have repeatedly demonstrated cardiovascular, metabolic, mental and musculoskeletal benefits galore. Furthermore they have recently shown that running does not cause knee osteoarthritis unless….you have had previous injury, poor mechanics or obvious alignment issues. Knee injuries are common in runners, more common in female runners, and fewer women run past their 50s. Might stride frequency be a factor here?

A US study looked at stride frequency (SF) and tibio-femoral joint (TFJ: knee) shear and compression forces among recreational female runners to see if those with the highest SF had lower TFJ forces at impact. 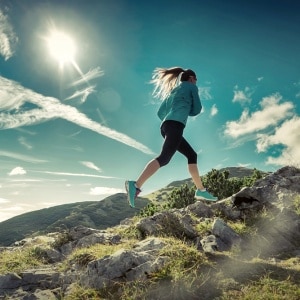 Fifty-five healthy runners ran at a designated speed (6.67 mph) on an instrumented treadmill that could measure impact forces at self-selected SF’s.They were divided into tertiles of low (<166 steps/min), middle and high (>178 steps/min) SF’s.

Consistent with other studies that compared SF, this found that those who ran at high SF actually had the lowest anterior shear forces, compression forces and medial compartment (inner side of the knee) forces while those who ran with fewer strides/min had higher knee forces.

This is not unexpected. Running the same speed with fewer steps means the athlete is taking longer strides per unit distance. Longer strides means both pushing off with more force and landing or hitting the ground with more force. Other studies have suggested that shorter, more frequent strides may actually minimize the forces that contribute to knee injuries. This one seems to support that contention.

Most folks know that they can count on about 100 calories burned for each mile run. If you walk a mile, it’ll be about 85 calories. Data varies for a variety of exercises and activities but now a Texas study has calculated a prediction equation for calories burned during a resistance training routine. Of course, you’ll have to do the same one used in the study but it’s a pretty sound program.

The 52 healthy, active subjects (27 men) ranged from 20-58 years old, but the authors don’t tell us if they were experienced lifters or not. They were pre-tested on a variety of anthropometric and physiological factors including body composition and aerobic capacity. Three days later they were strength tested on 7 common exercises: leg press, chest press, leg curl, lat pull down, leg extension, triceps presses and biceps curls. Their predicted max on each exercise was used to calculate the training load. 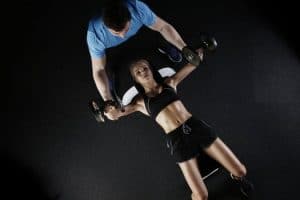 At STEPS Fitness, we promote what we call a flexed-hip lunge vs the typical upright trunk position lunge. A study from the Journal of Orthopedic & Sports Physical Therapy (July 2008) actually tested this technique and confirmed that it produced “significant increases in…hip extensor and ankle planter flexor impulse as well as gluteus maximus and biceps femoris (hamstring)” activation.  In other words, this works your butt as much as you feel it does!

Sitting kills, especially if you sit more than 9.5 hours/day. A study in the British Medical Journal found that virtually any intensity of activity that keeps you moving vs being sedentary is sufficient to lower your risk of early death.  Reviewing records of 36,383 adults from 40 and up (avg. 62) from Western Europe and the US, and following up over a 5.8 year span,  found those who are most sedentary were at higher risk of dying early from all causes. Unlike many studies of this nature, this one actually used accelerometers to verify and categorize activity levels.                                                    CNN Health  Aug. 2019