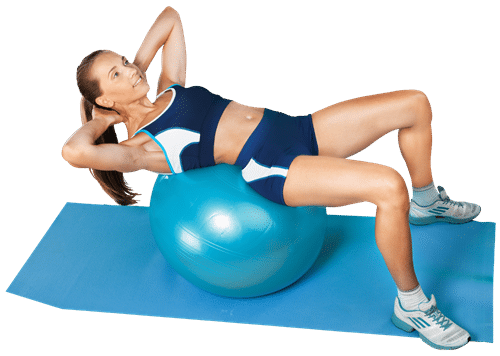 Much has been done by exercise pros over the past 20 yrs to elevate the formerly known “Swiss ball” (SB) to near-Olympian levels of wonder results. What was originally a ball used in neurological therapy for newborns with developmental issues. Once the ball hit America, like many other things that had intrinsic value and utility unto their own, the SB took on a mind of its own. With claims that only now are being fully investigated for veracity, but let me give some history here….

About 18 yrs ago, my colleague, who had received treatment for chronic low back issues, came to the gym with a new-fangled exercise toy – the SB. She knew two exercises, as prescribed by her PT: the crunch and the bridge (feet on ball, lying supine on floor, raising hips.) Both were good enough for most people’s needs but the story doesn’t end there. within a few years, every gym and trainer had a SB and new exercises were being created a mile a minute. within a few years, some jokers – you know them, and they know who they are – were even promoting the SB for doing squats – no, not against a wall or with a partner; doing squats ON the ball. Like the dogs in the circus, or even the elephants. only stupider – because presumably these were bright human beings doing stupid human tricks…of absolutely no legitimate value whatsoever.

Claims such as improving balance, stability, and core strength overwhelmed the media and trade mags. There was still no research to back it up until the late 90s. At first, the reports looked good – SB crunches engaged the ab muscles better than regular ones tho not as well as other – in particular, the bicycle – exercises. Still, it had value now, and the new concepts of spinal stability especially of the smaller interspinous muscles – rotatores and multifidi – were supportive of unstable surfaces for performing exercises to benefit these mini muscles that normally atrophy post injury. From there, tho, it was a stretch to make other claims such as get stronger, get better core stability for athletics, and get better posture. Thus far, none of these claims have been verified.

Having been an instructor for Exercise ETC, Inc, out of Ft Lauderdale, I had to confront these issues head on with participants who bought into such claims. Many a time I sat on a SB with lousy posture mimicking that which they themselves were sitting to demonstrate that it’s feasible to sit on a ball and get no inherent benefit to posture. Likewise, many studies have been done demonstrating that more strength is gained by doing exercises on stable surfaces than on unstable ones. Furthermore, once basic stability of the spine is intact, further challenges via the SB probably don’t offer any functional benefits. After all, how many life activities take place on a 65 cm spherical surface? No great athlete in pre-modern or modern history has gotten there with such a tool and all great athletes who use them were great before they used them; the SB may simply be another of many tools in their training arsenals, one likely to be more a waste of time than anything else.

So here comes an article in the Times discussing claims that 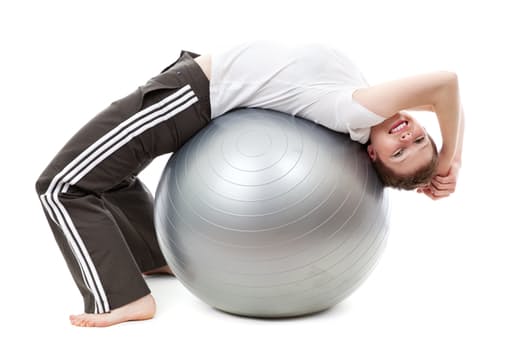 sitting on a ball at work increases calorie burn and posture. One study did indeed show an increase of 4 – read: FOUR – extra calories per hour of sitting. Let’s put that in perspective: get up and get a drink of water, talk with a co-worker for a few minutes – and you’ll burn more calories, hydrate yourself, and derive social benefits far beyond sitting those extra few minutes on a ball. Besides, for a full 32 extra calories/day, why not take a 1/3 mile walk and get cardiovascular benefits that far exceed those of sitting anywhere let alone a ball.

BTW, the studies do not support improved posture. In fact, not only can people slouch on a ball; not only might you sit straighter whether on a ball or in a chair; but posture is nearly impossible to train without conscious decisions made throughout the day to exert oneself into a proper posture. So it ain’t the ball, per se. In fact, if anything, the new science of sedentary behavior suggests that sitting on anything is less valuable to health and body composition than standing, So SB sitting is actually bad for you, and no better than sitting on a good chair.