The answer to the title question, “What is ‘Old’ and How Can One Procrastinate Aging”, is a timeless one. It’s as old as cognition itself. For the next step after old is dead and mankind has been trying to make sense of that once he and she realized he and she existed beyond the bodily demands of survival.

This New York Times article raises the same question from a very personal stance, “Am I ‘Old’?” For when someone asks their doctor or a confidante that question, invariably the person already suspects he/she knows the answer. For many, it’s a no-brainer, especially after an injury, medical event, or reflection in the mirror that shocks one’s consciousness into a state of mortality.

Uniquely, even aged athletes know when they’re getting old. Usually it has to do with data points, like running speed or weight lifted, or aches and pains caused by trying to keep young.

And we all know folks who are old before their time, usually due to chronic health conditions including obesity, arthritis, heart disease, diabetes, etc. Even with treatments, or surgeries such as joint replacements, we suspect the aging process is accelerating despite continued activities and athletic pursuits. (Disclaimer: Having had a hip replacement in December 2017, I spent the next 9 months preparing for and trekking Mt Kilimanjaro. While that training and that effort looked good on paper, there was no doubt that my body was older than it was before the replacement surgery, though the spirit was not yet there.)

Likewise, we all know old people, chronologically, who, for whatever reasons – physical and/or intellectual and/or spiritual – are still younger than their years. They may be old, but they’re still young at heart or in mind. 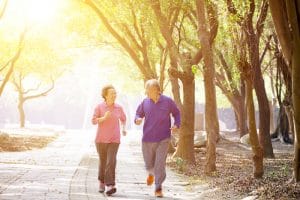 Going back to the article, though, let’s summarize what it takes to make one younger than one’s years:

In general, these six elements of life can carry one into a place we call old age without getting old if optimized within one’s capabilities. They each require work, sometimes hard work, sometimes really hard work. But the rewards are there to be discovered for and by each person.

Tomorrow is Christmas. I sent a Christmas greeting to my fellow personal trainers and my clients that expressed a timeless and cross-cultural meaning of this holiday, that mankind and womenkind have always sought peace on earth and good will to man/woman, and I’d even include nature in this. It is a day, a week, when those who believe in Jesus Christ’s meaning take solace in his birth, and when others take a break from work regardless of the meaning of Christ.

But the true meaning of Christ is not in the salvation he offers his believers.

It’s the salvation many of us strive for in delaying old age by exercising, eating well, self-reflection, keeping an open mind, and socializing with those who matter to us. We’re all aging by virtue of time’s passage, and some of us will get old before or after our years, so do what you must, whether it’s go to church or take a run, gorge on high-fat/high-sugar foods or eat a salad with salmon. Whatever you do to delay getting old is your thing, but do so with friends, family and a sense that your peace on earth infects others, and that brings good will to all.