The world of fitness and exercise is full of mythologies, and this one keeps cropping up: you can run too much for good health. Ken Cooper, M.D., the father of aerobics, from Dallas, TX, said as much several years ago…when he stopped running so much, most likely because of the wear and tear it imposes on structures other than organic; that is, on joints. He reputedly said anything more than 30 mins is for reasons other than health. Of course, he,like many acolytes of his who took up running, ran and trained for longer races like marathons before they ever came out against doing so. Thus, their long running was oriented toward competition, not just health, tho the latter often stemmed from the former.
This article – http://www.runnersworld.com/health/too-much-running-myth-rises-again – raises a 2012 iteration of the claim and addresses the fallacies of the claimants despite their being doctors and researchers. I want to address this not from the studies’ perspectives but from reality’s. On thanksgiving, at a friend’s house, someone who’s known me a long long time, I was asked 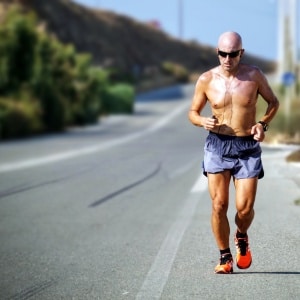 if I’d have done it the same as I did the first time around knowing what I know now. The ‘it’ was tae kwon do, the source of great pride, joy, excitement grounding, competition, success…and a new hip and a someday soon new knee. My response was basically yes tho I would have taken at least one day off per week over the 20 some odd years I trained nearly daily, 3-5 hours per with no holidays other than visits home to see my folks or when I got sick. Had I done so, it would have added approximately 3 years to my competitive life – 52 x 20 = 1040 days extra. It may also have enabled me to heal better thereby avoiding what joint issues I have today.
Finally, it would likely have helped me avoid the pitfalls of overtraining, with long periods of declining performance followed by briefer periods of improvements. BUT we didn’t know this stuff at the time; today we do. Back in the 70s when I started, it was balls-to-the-walls, all-out, now-or-never training. If you were going to get good, let alone great, you had to bust your ass daily, constantly adding kicks, in my case, or miles, in Ken Cooper’s.
Not til we got older and achier did we come to see that maybe there’s a better way. In fact, scientifically speaking, the concept of periodization didn’t come to the exercise science lexicon til the early- to mid- 80s; it was developed in the soviet bloc – remember them, the russkies,, the eart germans, bulgarians, etc? They’d been doing it for years but fitness was cheaper then, when all we know today would have been poo-pooed or even booed if someone had claimed it 40 yrs ago, esp if it was developed by those backwater commies.
However, now we know better, and tho I would have changed the schedule of the workouts, I would still have gone all out overall. Why? Not just because I am a male, not just because I am competitive with others and myself. The main driver, other than ego and self-concept, was that only in youth can you even consider doing what it was I was trying to achieve.
Yes, other older folks get black belts, and maybe some even become pretty good, but some sporting activities demand the attributes of the young, and martial arts is one of those. so, while it may be true that we can and maybe should keep our sports participation levels to healthy levels in the name of fitness, wellness, and longevity, the desire for excellence – part ego, part id – is why we often push ourselves beyond what’s tolerable and what’s detrimental. I’m not sure I would carte blanc suggest all folks not try to excel, for then life would be dull if we all operated at 65% of max. It’s like asking your stock broker to just try to get a 5% annual return on your investments. Why demand less than what’s possible?
Having said that, and using that example, tho, remember, there is increased risk when you strive to higher levels. You might lose some money. You might lose some sleep, but then you might hit the jack pot. That’s what long distance running does for you: it gets you one more chance to hit the jackpot you set out for yourself. Ego, id? Who cares? Sometimes you just gotta run, or kick, or bike or whatever, to get ahead of the pack of others or of your own self limitations. Yes, it was worth it then, and it’s worth it now. Thank goodness for artificial joints, tho.