It’s been a 2-year presidential campaign, but last November Americans made their choice and we now have a new president. Like any change, there’s the excitement and fear that accompanies it but when it comes to politics, it’s about evenly split. However, last November brought a change here at STEPS Fitness that only brought excitement: we got a new landlord and, with it, new opportunities.

When we learned that one of our co-tenants was leaving, we immediately took the opportunity to jump on it. By doing so, our fellow wellness colleagues, Nan Allison, R.D., and Preston Wakefield, thumbs of magic ART practitioner, could finally get the extra space to expand their practices. Each took 3 offices and are building and revising their individual practices to include associates and other elements. Dan DeFigio, who had two offices here on the first floor, moved his treatment room upstairs, giving us the ability to knock down 4 offices and open up the formerly-known quiet area. (Dan and I moved to new spaces to create a larger, more diversified space.)

Colleen Bridges, who’s been running the Parkinson’s boxing classes, Rock Steady, since last Spring, has been itching for a space where she could accommodate larger groups of ‘boxers’. She now has it. (www.musiccity.rsbaffiliate.com) She has put up 3 professional-grade speed bags and we’ve hung 3 heavy bags on a 10’ TRX frame that now join the 3 standing boxing bags to allow her a loud, busy, active, enjoyable, knock-out, drag-down boxing gym full of enthusiastic participants. This program, which has a long history of success in helping those with Parkinson’s disease (PD), builds on the evidence.

Several years ago, a professor took his mom with PD on a tandem bike ride. Afterwards she moved better for hours. He studied the process, referred to as forced intensity exercise, by using a mechanical cycle that pedaled faster than a person with PD might be able to pedal. Subjects got a boost in neuromotor function for hours or days after the 8-wk program.

A recent study in the Journal of Parkinson’s Disease (Nov, 2016) concluded that exercise “improves gait, reduces falls, and has positive effects on measures of strength, flexibility, and balance” in PD patients. They recommended “moderately vigorous activity that causes them to break a sweat without overexerting themselves.” That’s exactly what Colleen’s classes are doing now in our new space.

In addition to her classes, we now have several trainers who are going to be offering such classes as TRX workouts, women’s self-defense, and other small group trainings. Please contact our office at 615-269-8844 for updates on these or check our website for more on group personal training at www.stepsfitness.com.

And check out these pics of the place. 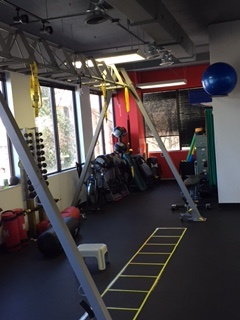 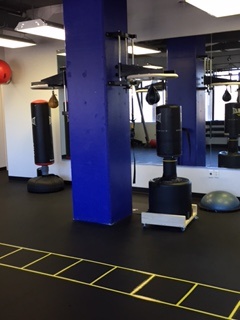 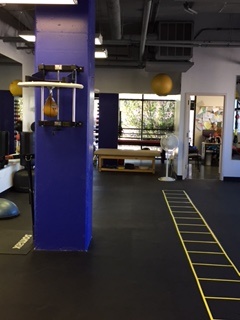 On Testing, Assessment, and Training

Nearly every fitness professional has been told or read in a book or professional journal that a client should be tested and assessed prior to starting an exercise program. For obvious reasons, certain people should be tested for safety of participation, to establish a baseline and create landmarks of change.

But what kinds of tests and assessments should a personal trainer do with and for her clients? When is one type of test appropriate and when is another?

Physicians have standards that place them at a medico-legal risk if they deviate too far from these standards. Trainers do not have standards, and that’s where assessment comes in.

Some of the most common tests are measures of strength, aerobic endurance, body composition, flexibility and balance. There are a slew of protocols that a trainer can choose from, but first it should be asked “Why?” And “Which test?”

Let’s start with strength tests. Typical recommendations in our literature are bench press and squat strength; other exercises can be substituted. But would you put a person on a bench press machine or rack who’s not ever lifted a barbell? Would it be bad for their shoulders?And what, other than a number, does it tell you even if you safely performed the test to some level of maximum ability?

The questions go on forever. The same reasoning can be applied to cardio endurance – treadmill, cycle? – and flexibility – sit and reach, goniometer? – balance – static or dynamic? Protocols vary according to age and disease state, but safety is primary.

Body composition is the toughest one. Despite having two of the best non-clinical modes of testing body fat here at STEPS, skinfold calipers and Intelametrix ultrasound, this is a tough one simply because (1) many don’t want to know, (2) many don’t need to know, and (3) many should not know. Even to lose weight or inches, knowing your body fatness may be more information than you need to know.

Test results can either motivate you or demotivate you. For some, they can generate enthusiasm to engage in lifestyle change; for others, they may burst the bubble of hopes and expectations for healthful and visible change.

That’s where assessment comes in. That initial session, when you and your trainer first meet, is where decisions have to be made; they can be changed in the future but for now you can both decide what’s relevant, what’s important, and what’s helpful.

Are You Getting Older and/or Aging

They are often mistakenly identified as the same thing. As you get older, you age. Duh!

But most of us who’ve gotten older and stayed relatively fit have done so at a slower pace than our peers who’ve aged without taking care to stay fit. Time will still exact its toll, and chronic illnesses or diseases may still strike by virtue of genetics, environment or past activities or inactivities, but the date on your driver’s license may not comport with the state of your body’s well-being.

However, once you start having musculoskeletal issues, the march of time accelerates the decline in function. The reasons: neuromuscular dysfunction and fatty infiltration.

When an injury occurs, inflammation follows. With inflammation comes pain and reduced nerve signaling to the muscles around the injury. Even with continued therapeutic exercises, the muscles around the injury weaken. This happens in athletes who tear and get surgery for an anterior cruciate ligament or middle-aged people who get a joint replacement: it can take up to a year, or longer for the replacement candidate, to restore size and strength of the muscles (especially the quadriceps.)

Fatty infiltration, scary as it sounds, is more disconcerting. With new non-invasive technologies and better scanning techniques, scientists are homing in on what happens to muscle as it ages. Like marbled steak, we all have some fat surrounding muscle tissue. Those who are overweight obviously have more fat weaving through their muscles (and organs, I might add.) But studies have shown that injured muscle has more fatty infiltration than uninjured muscle even on the same person.

And getting older increases it even more.

A recent study in the Journal of Orthopaedic and Sports Physical Therapy (March 2017) showed that older folks with and without low back pain have a muscle-to-fat ratio in the small supportive muscles of the spine (multifidi) that was very similar. The ones with low back pain had slightly less muscle relative to fat. Though, the ones with pain had smaller erector spinae muscles. Yet it was found that about 54% of older adult trunk muscle size was fat, with women and injured folks having less muscle overall.

What does all this mean? It means not only does injury and pain cause muscle to diminish in size and strength; it also causes it to diminish in functional quality. Aging is like an injury in the same way: it comes along with more fatty infiltration, smaller, weaker and less-responsive-to-stimuli muscles. That’s even without pain.

Obviously long-term resistance training is one piece of the slow-aging process. You can’t stop getting older (unless, of course, you die sooner) but you can slow down aging. That’s the beauty of consistent and regular exercise.