How to Catch Your Breath….and Why We Bend Forward

While trekking one of the trails of the Grand Canyon this past May, I found myself sucking wind on the long uphill climb. And wondered, why do I bend forward propping myself up with hands on knees, like any athlete who’s winded after a hard race or event, when standing tall should enhance air – and oxygen – uptake. Google explained it this way via several articles:

A study actually compared leaning forward vs standing tall with hands behind your head. It found that heart rate declines faster and to a greater extent leaning forward. This is important as it allows you to recover faster during an event that has built-in breaks, such as during a game. 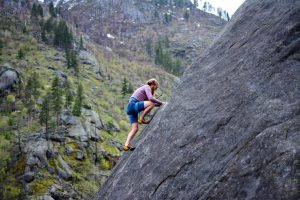 Here’s how it works. When you’re tipped forward, it positions your breathing muscle – the diaphragm – into a slightly better position to take more air into the lungs.

It also allows your abdominal muscles – which act as the force-producers to move the bellows (diaphragm) – to move more carbon dioxide out of the body as you exhale. When you remove CO2, you reduce acidity in your body and muscles, buffering the lactic acid the muscles created during the intense effort. That speeds the return of heart rate toward baseline.

One theory is that the “hunched-over position may also relay the message to your brain that it’s time to relax” despite the competitive circumstances around you. This depresses the sympathetic nervous system – the flight-or-fight mechanism we have that responds to stress and offers a shot at survival. And this, then, helps the parasympathetic nervous system – which manifests during calmer states of being – to slow breathing and relax muscles. And now you know the rest of the story.

Build Bone and Muscle to Reduce Risk of Falls

A recent study, recognizing that resistance training (RT) is one of the best, most organic prophylactics to the natural decline of both muscle and bone mass as we age (estimated at 1-2% loss per year after age 30!), looked at the potential benefits to older adults by adding creatine (Cr) supplementation to a RT program. Cr is a natural component of muscle that our body synthesizes from our diets. But a diet low on meat intake, which many older people follow for cardiovascular health purposes, or the aging process itself might warrant supplementation as we age.

Providing creatine (~8 g/day) during a 1-year, 3/wk whole-body RT program for 53 healthy older adults (>50 y/o) helped them gain significant lower-leg muscle density and bone (tibia) mass compared to a non-supplemented placebo group. These results suggest that a low-cost over-the-counter creatine supplement might accentuate the well-known benefits of a well-rounded, comprehensive and consistent RT program. While a staple in the weight room for athletes, especially strength and power athletes like football players, etc., Cr is not a customary supplement for older adults despite several studies demonstrating its value. 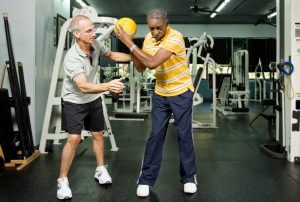 What needs to be done next is to investigate Cr supplementation to a cohort of older adults who do and do not engage in RT, and follow them long enough to ascertain its benefits against real-world falls and fractures. Unfortunately, getting older adults to do any, let alone resistance, training exercise for years on end is a tough task.