The word alone brings to mind the full 19,341 ft of a massive mountain in the midst of the plains of Tanzania. An anomaly of geology, Kili stands as an outpost beckoning trekkers to its cold, glacial, volcanic peak.

Thus my resident advisor from freshman year (1970) at Vandy and longest friend here in Nashville, Whitney Kemper, has determined to make that hike in order to  celebrate his 70th birthday in mid-August. Having lived and traveled far and wide, having run dozens of marathons and triathlons, Whitney felt that a sunset on this peak would be a metaphor for life itself. Since he lives and trains at altitude – 8333 ft – he’s pretty well   acclimated to thinner air. He’s still got to deal with another 11,000 ft of thinner air, but he’s very  comfortable with discomfort: he solo’d the Appalachian Trail.

Whitney invited some of his altitude-living running buddies to join him on this trek. And he invited his low-lander, triple-artificial jointed friend to make it, too. An offer I couldn’t refuse.

I’ve always been into fitness, lifting weights well before puberty, studying Tae Kwon Do more than my academics at Vandy, training and conditioning to achieve and compete at higher levels of black belt, to simply stay in healthy shape as I age, to rehab various injuries and surgeries…but never to ascend 19,341 ft.

As my formerly-competitive self said, it’s just another hill to climb.

And so it is. You see, fitness never ends unless you let it. There are multiple reasons to exercise, multiple ways to do so, and multiple benefits to accrue. People seek personal trainers to help orient them to exercise equipment, programs and methods. They seek the advice, motivation and guidance of trainers in order to minimize risk of injury, boredom and failure. 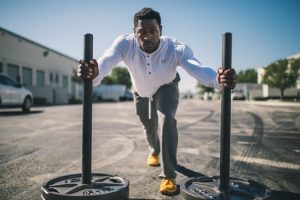 What we professionals often do, however, is prompt clients – even those with whom we’ve worked for years – to find out what goals, what benefits, what mountains they themselves want to ascend. Then we teach, coach and support. But you have to know the lay of the land from which someone comes or you won’t be able to appreciate the lay of the land ahead.

This is why the health history and goal-setting is so critical at the start of the trainer-client relationship: because every trek starts at one point and ends…where? There will be hills and valleys along the way, rocky roads and slippery slopes, external and environmental obstacles as well as wonders, fatigue, soreness, maybe even pains.

That’s the path any extended, lifelong wellness plan that includes exercise will cover. And the longer the path, the more likely it will encounter some or all of the above.

Kili’s path, the 8 day version we’re doing, is only a tad over 29 miles to the top. It takes you through 4 climate zones – from tropical forest to arctic tundra. It does not have heated water with which to shower. It has mud, rocks, scree, and possibly snow along the trail. It does not even provide oxygen at the higher altitudes: the air is ~50% thinner than Nashville’s 597 ft.

But I’ve always loved the challenges of a fit lifestyle. And the competitions. Trekking with a bunch of altitude-living elite athletes – and another triathlete from Asheville – will be a fitness challenge for all of us, but especially for me. I can’t run, bike or swim. But, by golly, I have a gym and some great trainers here with which I can work the heart and the legs so that Kili is just another hill to climb. Just a little colder. With less air.

Cycling: Making No Bones About It

Who doesn’t marvel at the cyclists who do the multi-day challenge of the Tour de France? These guys gut it out over massive mountains and various climatic changes day after day, pumping their legs at speeds many of us can’t achieve during low-traffic times in Nashville. And some fall – hard.

But studies show that, in addition to their superbly-conditioned hearts, lungs and legs, recreational and competitive cyclists have weak bones – osteopenia, in fact. The very same condition many women have even before menopause but usually develop once they are post-menopause.

A recent study in the NSCA’s flagship journal, the Journal of Strength and Conditioning Research, done right here at Middle Tennessee State University, investigated the bone density of 40 cyclists at the start of the cycling season. The researchers were looking at a couple variables other than the amount of time cycling: diet (based on a 1-day recall, which is highly inaccurate and unrepresentative but was used to determine calcium intake) and whether they weight trained.

Not unsurprisingly, they found that those who’d been riding the longest had the lowest bone densities, especially of the spine. Eight of the 13 between 45 and 50 years of age had osteopenia. Older cyclists, as a group, actually exhibited less osteopenia than the youngsters. Also, calcium intake, based on the method they used, did not show any correlation to  overall bone density.

But what was most revealing were the findings as regards weight training. At all ages, those who participated in weight training in the off-season were found to  have higher bone densities of the lumbar spine, hip, femoral neck (where many osteo-related fractures occur) and the femoral trochanter.

This is encouraging in that doing 25-60 minutes per week of lifting weights during the off-season may be enough to prevent the bone loss that occurs from training so long and hard doing non-weight-bearing exercise – like cycling or Spin.

Weight lifting, in other words, is useful for more than weight management, strength, power and balance. It may be the elixir of choice when it comes to keeping the skeleton healthy and erect.

This past winter, STEPS introduced a new community outreach program by hosting three evening seminars. Held on Wednesday evenings and spaced a month apart, we invited health professionals to share their knowledge and research on matters pertaining to health and wellness.

In January, Dr. Richard Miller and his colleagues at Vanderbilt Division of Trauma and Surgical Critical Care spoke to us about frailty – the causes and consequences. With no prompting, he proceeded to do an infomercial on behalf of what we already do at STEPS: resistance and balance training are critical for the elderly to reduce the risk and consequences of  age-related muscle loss.

Then in February, Nan Allison, RD, and two of her colleagues addressed the nature of and principles behind many of the current fad diets, from intermittent fasting to kept dieting. They discussed the research behind the various diets and addressed the risks and benefits.

Finally Dan DeFigio, president of Basics & Beyond personal training, gave an eye-opening presentation on snacking, in particular on sweets and other simple carbs. Having authored the “Dummy’s Guide” on stopping the sugar habit, Dan shared the main tips to a group of normal Americans in love with their simple carbs.

Next Fall we will continue our program so keep your calendar open at least one Wednesday a month. And thank you to all of our presenters for making this program a success.

Saying Good-bye Is So Very Hard to Do

Latina writes: As Nathan Wolf’s trainer, I recently lost a man who believed in the  importance of staying fit. Nathan lived his life to the fullest, experiencing many jobs from coaching youth sports, dealing blackjack in Vegas, and driving a tour bus. The stories Nathan told were remarkable and you realized he surrounded his life with great people, exceptional food, and exercise.

“He will be missed, as he was truly one of the good guys,” Latina added.

Speaking for the rest of the crew here at STEPS, Nathan was a steady source of lively conversation on topics ranging far and wide, always with a twinge of humor, and even a touch of wisdom. He treated us all as friends, and we will miss our friend,  the master kibitzer, too.