Carbs + Protein vs Carbs for Recovery

Carbohydrates – sugars, starches, fruits, veggies – provide the fuel muscles and other organs (heart, brain) need to function. In the body, the carbs you eat convert to glycogen which is stored in muscles and the liver for when it’s needed. Exercise uses carbs, and prolonged exercise can ‘deplete’ the carbs in the muscle unless the liver can release some into the blood to maintain homeostasis in working muscles and elsewhere. Carbs have a storied past when it comes to athletics, not just weight management, as we’ve written here.

The American College of Sports Medicine recommends that athletes consume at least 1.2 g/kg of body mass/hr after exercise to replenish depleted stores. The body also has to replenish proteins that were broken down in order to repair muscle. Furthermore, carbs boost insulin output which helps push glycogen and protein into the muscles. Protein intake is the vogue athletic and non-athletic concern both in amount and timing, as we’ve covered here, here, and here.

So, does a combination of protein with carbs enhance recovery any better than carbs alone?

A U.S. Army review of research-based studies determined that if calories are kept the same – that is, if you eat the same amount of carb calories as you do of carbs+protein, glycogen stores are replenished the same. Notably, including protein in the total calories consumed after exercise does not impair glycogen storage. And including protein into the mix, with increased insulin floating around, synergistically reduces protein breakdown from exercise to a better degree than carbs alone.

Despite the lower overall amount of carbohydrates in a mixed recovery diet, adding protein “facilitate[d] muscle repair, remodeling, and protein accretion.” It might behoove athletes to meet their 1.2 gh/kg/hr post-exercise needs by consuming 0.9 g/kg/hr with 0.3 g/kg/hr of protein so long as environmental and training/competing circumstances permit.

Runners, Take Note: How Best to Train Your Hamstrings

Almost no injury scares runners more than a torn hamstring, the muscles of the back of the thigh. There are many exercises that have been promoted to prevent such injuries based on the phase in the running gait that seems to be most associated with when the muscle tears. Virtually every and any exercise that challenges the muscle’s ability to flex the knee, and progressively adds resistance so it gets stronger and more resistant to activity-induced damage, has been studied. Most renowned, of late, is the Nordic hamstring curl, where you kneel with your feet held firmly so the shins remain stable while tilting the entire body forward. But the traditional hamstring leg curl machines might also meet the needs of athletes. 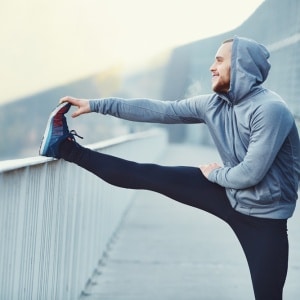 There are 2 kinds: seated and prone. The former starts the muscles in a lengthened position while the latter start them in a shorter position. Twenty healthy adults trained one leg seated, the other in a prone position to see if there were any differences between them after a 12 week, twice-weekly routine of 5 sets of 10 reps at 70% of max. Then, brutally, 19 of the original 20 plus 12 untrained participants did a severe series of eccentric leg curls to assess the amount of damage that occurred at 24, 48, and 72 hours post-exercise, via MRI.

The seated leg curl induced greater increases in muscle volume (more hypertrophy) in 3 of the 4 muscles that make up the hamstring group, presumably making them stronger, but did not confer any better protection against muscle damage as the MRIs showed.

Is muscle memory really just “basal and acute resistance exercise-induced gene expression and cell signaling events [that] are influenced by previous strength training history?” A Swedish had 19 untrained women do unilateral leg exercises for 10 weeks, followed by 20 weeks of detraining. They then did a single training session followed by specific metabolic tests. They found that the previously-trained leg expressed “greater oxidative capacity as well as a greater capacity for protein synthesis and muscle remodeling…clearly [supported] the view of a molecular muscle memory in response to strength training.“                             MSSE Aug. 2020