Most everyone knows that cardio exercise is valuable to health and longevity. It improves the heart muscle itself plus the blood vessels that carry oxygenated blood to other organs and muscles. It keeps resting blood pressures lower, reduces high levels of bad cholesterol and triglycerides and sugar. And it helps burn calories to help you stay lean, get lean.

And most now recognize the benefits of resistance training (RT) or weight training for everyone, especially for those who are aging or are aged. By trying to move a resistance heavier than what you do normally, you’ll stimulate the muscles to do all three of the following: learn to contract, contract harder and maybe even get larger. The latter is a hormonal issue as middle-age and older women have a far less likelihood of building massive muscles  than males. RT helps with cholesterol, triglycerides and sugar metabolism.

But mostly what we recognize RT for is its ability to help us continue activities of daily living, recreation, sport and leisure and reduce our risk of musculoskeletal injury. 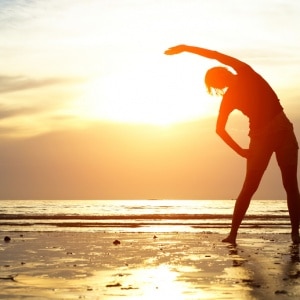 Finally, we all know, especially as we age, that maintaining some flexibility, especially in muscles and joints that cause us pain or reduce our functionality, is worth doing somewhat regularly. Stretching is the final frontier for most exercise programs. Its value is demonstrated by the popularity of various forms of yoga, authentic or not. It helps us relax, manage stress and move freely.

In recent years, as the population has aged, balance and stability work has entered the fitness lexicon. I’ve written and posted about this for several years now. Check here, here, and here for additional posts.  But the aging process is often accompanied by reduced balance and higher risk of falls. So the fitness world has incorporated principles of balance training from orthopedic rehab settings and some neurological disorders like stroke and Parkinson’s Disease.

Taken together, the benefits of cardio, RT, flexibility and balance training have allowed people to live better, longer and healthier. Yet, somehow, unless you or someone you know has had a low-impact fracture attributed to bone loss, most of us have disregarded our bones, the very skeletal structures that allows muscles to move our bodies and pump blood through the vascular system so that we can be fitter and healthier.

Bones, one might say, are the last frontier of fitness largely because we often assume they will be there for us when we need them. It is this frontier which this article discusses and which I wish to expand upon here.

Now you might be asking why the body has cells that destroy bone? The answer is quite simple to comprehend: if you didn’t break down bone, your bones would get so big, so thick, and so heavy that your muscles would not be able to move them.

Think of skin: every time you wash, and even if you don’t, you lose skin cells off the surface. But you don’t notice yourself getting smaller as a result because you make new ones. But where do bones shed old bone? Nowhere. So osteoclasts break it down to its base elements, and osteoblasts build new bone to repair it.

But aging, hormones (especially in women once menopause hits), and disuse give the osteoclasts more power than the blasts, leading to net bone mineral density loss. Before it gets too bad, this is called osteopenia; but once your bone density is at the extreme of low for your age and gender, it is called osteoporosis.

There are a few ways to maintain bone density, and even add more as we age, but you need to provide both the building blocks – specific nutrients such as calcium, magnesium and vitamin D, plus an appropriate stimulus that forces the body to make more rapid repairs than the osteoclast-induced disrepair. I have addressed some of these in previous posts here, here and here. 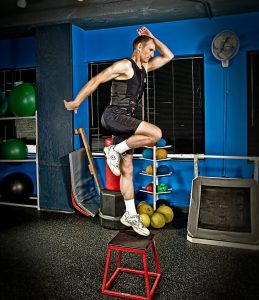 You need resistance training at high enough intensities that the tendons pulling on the bones induce bone growth at the site of insertion and origin. And you need impact, compressive and bending forces that demand increased growth.

It should be reiterated here that, as we age, as we lose the hormonal supports that sustained bone growth when we were growing into adulthood, the ratio of build-to-destroy leans in favor of destroy.

Since males tend to be larger, and larger muscled, than women, we start with more bone in reserve. And since women, especially those who’ve dieted excessively or endeavored to stay lean by engaging in low-impact, low-force activities – like most toning classes, start with leaner, smaller bones, the cessation of menses (menopause) bends the build-to-destroy curve away from build.

Science has debated exact forces necessary to sustain bone. For the most part, walking is better than sitting, but not as good as jogging; and jogging is really not that beneficial especially compared to running. Cycling and swimming are virtually useless when it comes to building bones.

How about dance aerobic classes like Zumba, Jazzercise, etc? Good, but most folks don’t keep up those classes into middle or old age.

And how about Step Aerobics classes? If you work off large enough steps and do some of the plyos (plyometric) jumps, you’re building bone. But the risk is lower extremity joint pains from overuse. In other words, a couple times a week is fine but many who over-did it in youth are paying forward to it now.

What has been clearly demonstrated to be useful in building bone is resistance exercise (RT). The intensity of lifts required range in the 70% of maximal ability or higher, which most folks, especially older folks of both genders, won’t do. It’s just a very demanding level of work and can be risky to joints, too.

Some studies have suggested that high repetition, lower loads – 50% or greater – can help with bone density. Others have suggested that whole body vibration could help, especially since you might be able to lift lighter loads but get the ground-up stimulation the platform creates.

As the article mentioned above states, the goal is to slow the rate of bone loss. Cardio is good for the heart, no doubt. And yes, jumping or running would be good for bones, but usually not for older folks.

RT is good for muscles, somewhat good for the heart, and recent studies show it’s even good for the brain. But it may be the best ‘drug’ for the bones. Not only does it increase functionality, which allows you to move more in regular activities; not only does RT help you maintain your ability to propel yourself in bone-building cardio activities. It alone helps build bone density like no other life-long activity.

But make sure you work with a professional who can guide your program in the right, and safe, direction. Because bones make joints, and the wrong program can ruin all those benefits you could otherwise accrue, thereby affecting bone density negatively. That’s where a good personal trainer comes in handy. And bone-y.