A brief history of spine pain and therapy takes us through the 1950s when the abdominal curl/crunch was highly recommended by Drs. Kraus and Williams to help those with mechanical low back pain. Then in the 1970s, McKenzie came up with his spinal extension exercises for those with disk problems.

After bouncing around the years of excessive crunches and stability ball bridges, in the mid-19990s, some Aussie physiotherapists noted that, for those with a particular spinal defect, the navel drawing-in maneuver can re-train the transverse abdominis (TA) to do its job – stabilizing the inherently-unstable spine. It was then that the concept of ‘core’ grew into the therapeutic lexicon.

Core muscles now referred to not just the anterior abdominal muscles but the ‘corset’ muscles of the deep anterior and posterior muscles, as well as the gluteals. 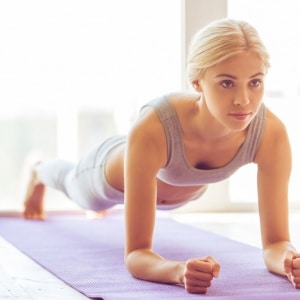 But it was not till Canadian spine researcher, Stuart McGill, upset the apple cart with his studies on the plank that front and side planks became the rage, in physical therapy and in gyms. Since early studies showed  that young athletes who could hold a plank for 100-120 seconds tended to be less likely to injure their backs during the season, trainers started pushing long-held planks. But do these really help, or should they be used as tests only?

A March 28 article in Business Insider highlights McGill’s thoughts on the matter. According to him, “There’s no utility to this kind of activity other than claiming a record.”

He recommends 10-second planks held with good form multiple times, depending on the person’s needs.

Unless, that is, you have tons of time on your hands and you’re trying to beat the 8:01-hour plank that stands as the current world record. Feel free to read more about the plank here, here, and here.

As an arthritic joint progressively worsens, more than just the cartilage deteriorates. Muscles around the joint weaken, further impairing function and aggravating joint movements that cause pain. Thus, any therapy entails improving both the strength and function of the major muscles of that joint.

A group of Brazilian researchers performed one of the only studies comparing heavy-load (HL) leg extensions and leg presses to light-load (LL) or light-load with blood flow restriction (LL-BFR) using a specialized tourniquet. Originally known as “kaatsu” based on its Japanese origins, BFR has been shown effective in increasing both size and strength of muscles using sub-optimal loads. By restricting blood flow, a cascade of metabolic procedures occurs that forces muscles to adapt as if being trained with heavier resistances – but the loads are very light.

In this study, all the groups improved but the HL and LL-BFR improved more than the LL. In the functional tests, the results also favored the stronger groups. However, the HL caused more subjects to experience enough pain to drop out of the study. BFR, with light loads, has worked at STEPS for years. And now studies like this one and this and this back this up.

A recent study of the effects of a bout of high-volume isokinetic resistance exercise protocol (HVP) on lower-body strength and markers of inflammation and muscle damage during recovery between young and middle-aged adult men found that, while performance declined with age, recovery, as indicated by the “inflammatory and muscle damage response from high-volume isokinetic exercise is similar between recreationally trained” men, young and middle age.             JSCR Dec. 2017